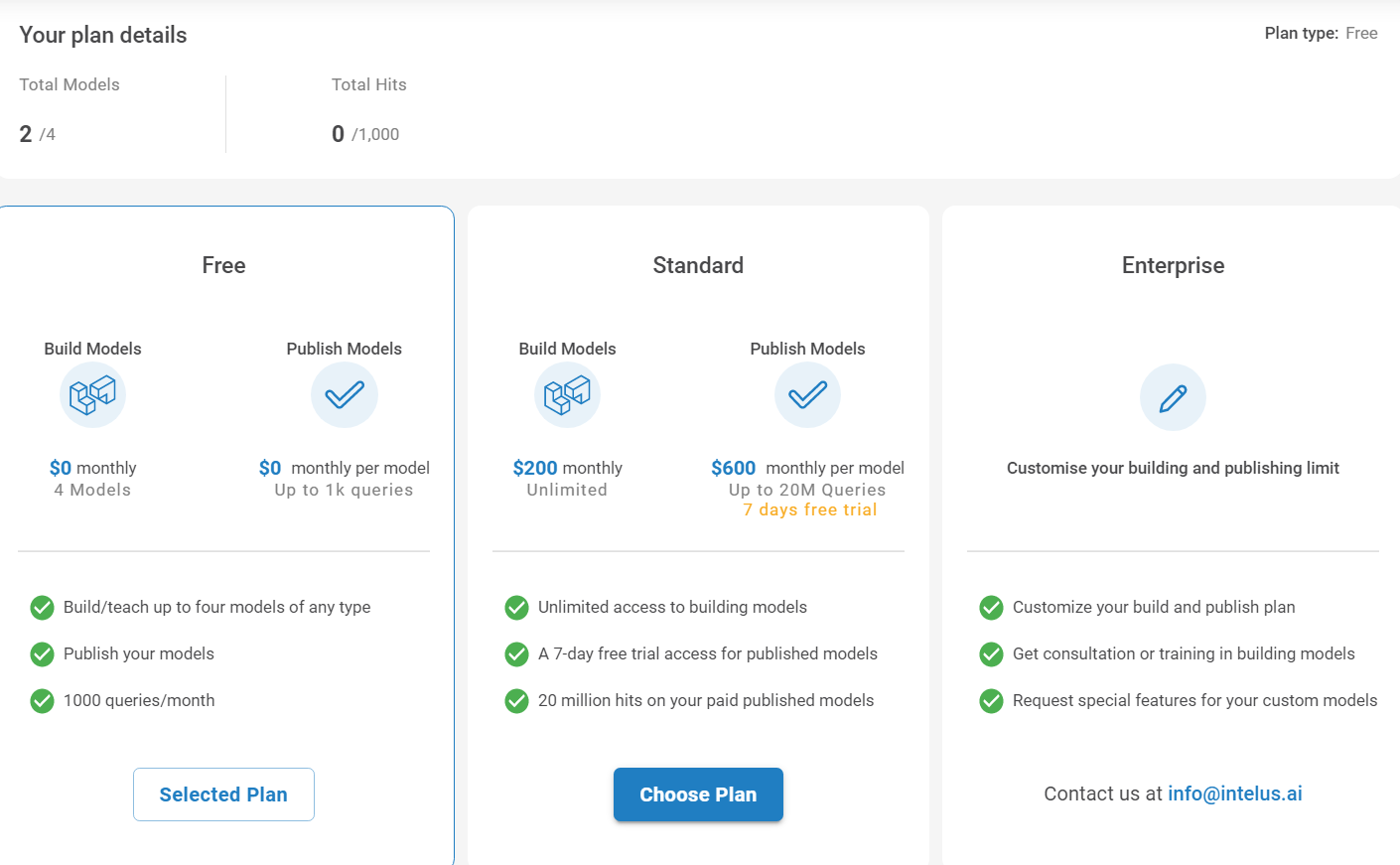 When you sign up on Duet, you are automatically on the free tier. The sign up process does not require a credit card since you are on the free tier. The free tier is limited to 4 models that you can build and 1000 queries renewable every month when you deploy your models. The standard tier doesn't have limits on the number of models you can build but does have a limit of 20 million queries you can send after deploying your models. The standard tier costs $199/month for building models, $600/classifier/month for an actively deployed classifier model version on an endpoint, and $1200/entity extractor/month for an actively deployed extractor model version on an endpoint. The standard tier has a guaranteed SLA of 99.95% uptime on the deployed endpoints.

In general, recurring monthly billing occurs on the first of every month. When you upgrade to standard tier, you are charged on the same day with $199 prorated to the number of days remaining in the month from the day you upgraded. For example, if you upgraded to standard tier on the 7th of October, you will be charged $153.33 on the same day for the remaining 23 days of the month. On Nov. 1st, you will be charged the recurring full $199 for the standard subscription.

When deploying a new version of a model on an endpoint, you have seven days to try it before you are charged. If you deactivate the endpoint prior to this 7-days period ending, you will not be charged. A model deployment will be charged right after the trial period prorated to the number of days remaining in the month until the next billing cycle at the beginning of next month.

Duet charges for each active model version deployed on an endpoint. For example, if you create a customer support classifier model and deploy it to endpoint V1, you will be charged monthly for V1 as long as it is active. If you later update your model and replace V1 with V2 of the model such that V2 only is active, you don't incur any additional charge ($600 for the active endpoint of V2). However, if you deploy V2 on a separate endpoint such that V1 and V2 remain active on two different endpoints, you will be charged separately for each active version on the two endpoints ($1200 for the active endpoints of V1 and V2).

There are two types of payments in Duet:

Once registered as standard, if your monthly account subscription payment has failed, it will result in the failure of both your authoring and deployed models subscriptions. Intelus will retry the payment for two days after which your account will be downgraded to the free tier. All your deployed models will continue to work and receive traffic successfully with a limit of 1000 API calls/month. However, when you sign in to Duet, you will have to choose only four models in your dashboard to continue to edit. If you have more than four models, the rest of them will not be editable until you settle your failed payments in which case you will be upgraded to standard again.

When deploying endpoints, first-time deployments will initiate a seven-day trial period before you are charged. After this seven-day period, if a scheduled payment fails, you will be given a two-day grace period to fix it.

If a user tries to replace an active endpoint with a different model(s), the user will have to pay prorated fees for the active model without a trial period. The monthly subscription will be updated accordingly.

When the limits of your free plan are reached, banners will appear that will prompt you to upgrade your account. Clicking one of the banners will bring you to the plans and usage page. 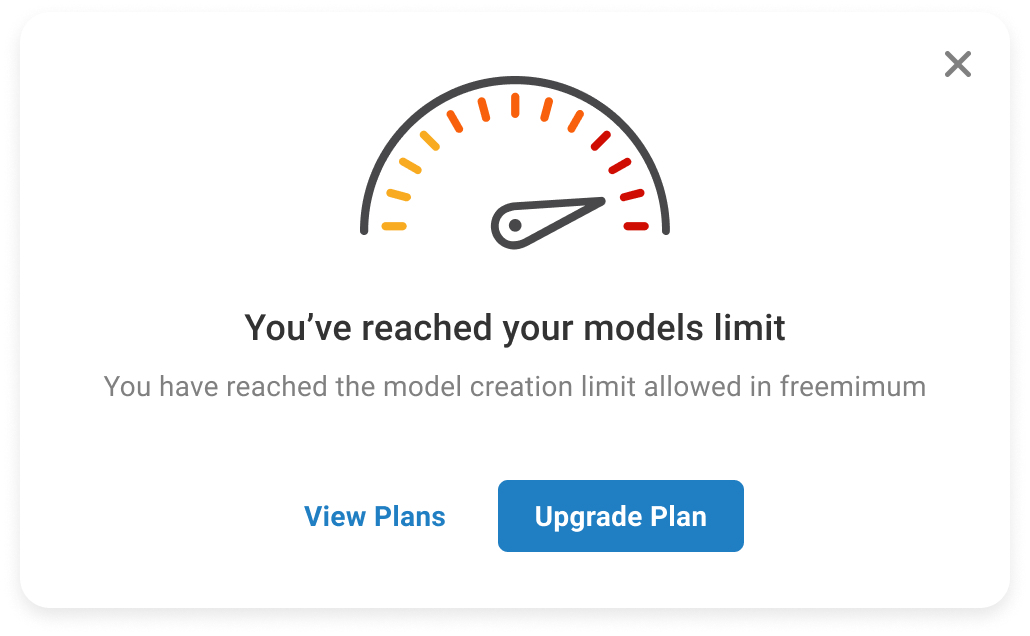 When the standard subscription is pending, banners will appear that will prompt you to complete your payment.

You can also access the plans and usage page from the top right dropdown menu. 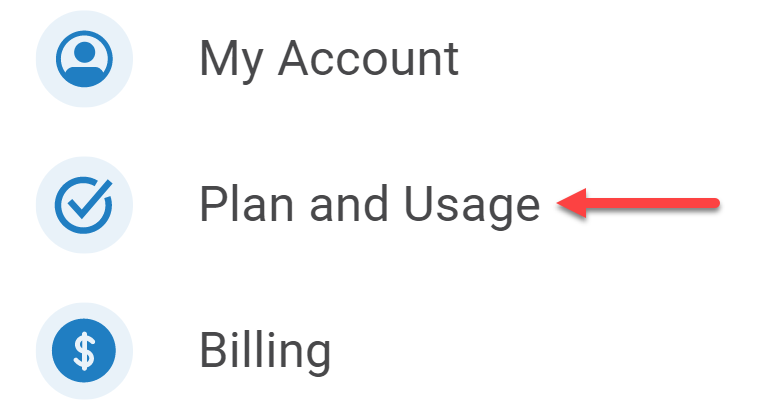 You can downgrade your account from the plans and usage page. To downgrade from standard to free, select the free option Choose Plan on the appropriate widget. You will be greeted with a pop-up that will ask you to confirm the decision to downgrade.

Once downgraded, your access will continue until the end of the month. At the start of the new month, if you have more than 4 models, the dashboard will prompt you to select four that you can continue to access on the free plan.

The others will remain as dimmed out cards. All active endpoints will continue to work, but their traffic will be limited to 1000 queries per month.

The billing page is only accessible from the top right dropdown menu. A widget shows the payment methods uploaded. You have to have one card act as the default on your profile and you cannot delete the last card remaining. The latest card added will always be default unless otherwise changed. From this widget you can also see your past invoices.